Check out The Foally of Man, a podcast featuring Chris the Brony and Robert the non-Brony as they explore Fallout: Equestria chapter by chapter. Watch/listen on YouTube, Libsyn, Twitter, and PodBean.
DraconicXeno

Added:
Saturday, November 26th, 2016
Last Update:
Tuesday, March 1st, 2022
Favorited By:
Be the first to favorite this story!
Adventure, Alternate Universe, Crossover, Dark
Dragonfire, a confident mercenary mare hardened by a lifetime living upon the decrepit corpse of a nation long since desolated, takes her life as it comes. Time passes her by easily enough in the dust bowl known as the southwest. She could almost say her life is perfect, so long as the ghost of a past plagued with sorrow, tragedy, and death doesn't catch up with her. Yet that life that was so close to perfection and yet so far is turned upside down when Dragonfire accepts one job too many. It starts off simple enough, but little does she know that she is more special than she had realised—so much so that somepony lurking in the shadows has been waiting for her for a very long time, and now they will stop at nothing to fulfill their age old goals. Now with only the help of her new ragtag group of friends, Dragonfire must trek across the wasteland in search of an answer that has plagued the minds of ponies since the dawn of civilization. In the end only one thing becomes clear; however, the secret to the origin of ponykind may prove to be its most deadly. 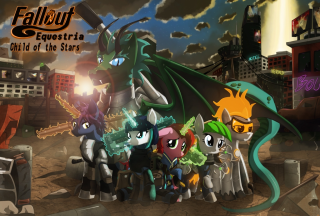 Chapter Seven: The List Of Places That Messed With Ponies
Jul 23rd, 2017

[Show all media]
Credits for some of the awesome resources used on this site:
Icon Font is provided by [url=http://fortawesome.github.com/Font-Awesome]Font Awesome[/url] [url=http://twitter.github.com/bootstrap/]Bootstrap[/url] is used for layout. Littlepip, Homage, and Velvet Remedy censor images created by Astroty. Thank you! Developers, there is an API on this site, please don't abuse it too much...
My Little Pony: Friendship is Magic is © Hasbro
Fallout and related games are © Bethesda Softworks
Fallout: Equestria is © Kkat
All other items are © their respective owners.